by King Kongo / The Plastic Fangs 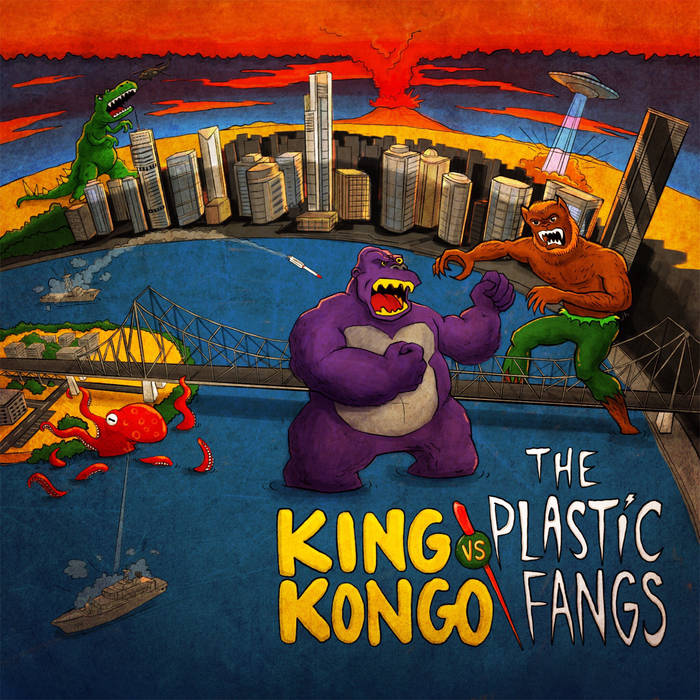 This is one of those things that was just meant to be. Scuzzy DIY punk grots KINGO KINGO had a bunch of songs lying around, garage surf reverb-worshippers THE PLASTIC FANGS had a completed EP sitting around doing nothing and both bands had been talking about doing something together for ages. Aware of the Fangs' dormant recordings, Valley Heat Records approached the band to see if they could help get the songs into the light of day, whilst at the same time, but separately, in talks with King Kongo about a release. Someone suggested doing a split and here we are!

Releasing as a limited run of 45 cassettes with illustrations by local artist Jordan Holden, the cover depicts a giant ape battling a fanged beast against a backdrop of Brisbane's cityscape with the iconic Mount Coot-tha erupting in the distance, because why not?!?!

The initial jubilance of the cosmos aligning perfectly for this release soon turned bittersweet when the Fangs' let it be known that they would be calling it quits after the album launch.

Guitarist/vocalist Sean Endicott muses that, "all good things must come to an end, and so too do The Plastic Fangs." Formed way back in 2003, the Fangs have been a staple of the Brisbane surf-rock landscape for punters seeking something a little outside your middle-of-the-road garage rock fare.

Side A: King Kongo - 'Live at The Lowbrow Lounge'

Recorded Live at The Lowbrow Lounge


Side B: The Plastic Fangs - 'Holy Moley'

Recorded, mixed and engineered by Cam Smith at Incremental Records